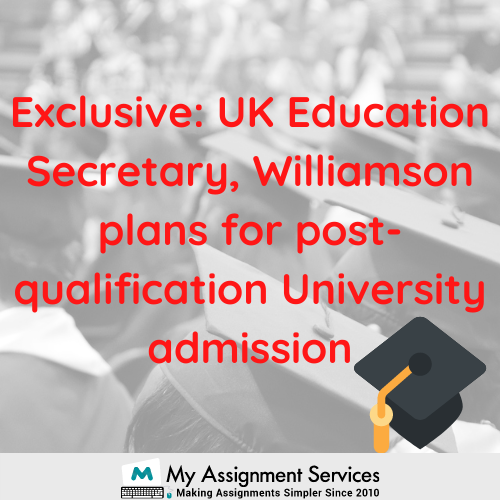 Students in England could receive offers from Universities only once they have acquired their final grades under proposals to change the current admission system, Gavin Williamson, the Education Secretary announced on 13th November.

Universities UK (UUK), the umbrella body for the university has suggested switching to a post-qualification admission model from 2023, subject to a full consultation, as part of various recommendations for greater transparency and trust in the admission system.

Gavin Williamson, while outlining his intention for the consideration of post-qualification university admissions, said that the Government will consult on proposals to “remove the unfairness” that some groups face today because of the inaccurate predicted grades. 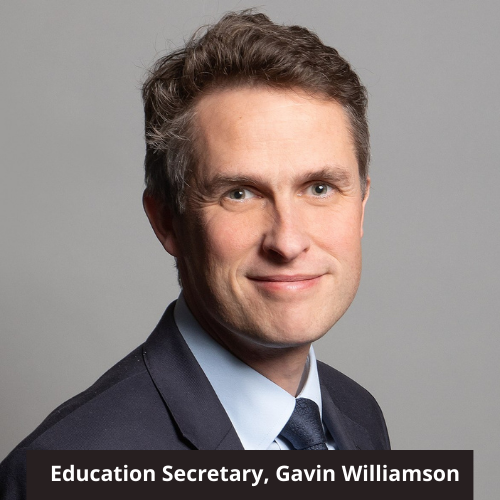 According to the UCAS data, in 2019 79% of 18 years olds in the nation accepted to different universities with at least 3 A levels had their grades over-predicted whereas 8% were under-predicted.

In the United Kingdom students apply for university places through the UCAS administrative system. They are required to submit various kinds of information comprising predicted exam grades, a personal statement, and academic references. This information is then assessed by the universities and students are offered places based on a holistic assessment of all the data provided by the students.

The University admission system has been under scrutiny for decades and reviews such as the Schwartz Review in 2004 have been conducted. There remain many criticisms; nonetheless, tweaks have been made to the system due to the reviews aforementioned. Current concerns focus on the use of predicted grades and unconditional offers and in particular their impact on disadvantaged groups.

The surge in unconditional offers has been attributed to the increasingly competitive market in higher education and the rising of tuition fees in 2012. The rapid increase in the number of unconditional offers is observed as demotivating for disadvantaged students and leads to underachievement in exams. Numerous reforms have been suggested to the admission systems for example moving to some kind of post-qualification application (PQA) scheme and the surged use of contextualised admissions.

The Labour Party on 14th August 2019 announced its support for the PQA system. Today, there are three overlapping admission system reviews taking place.

27th Feb. 2020- The office for students launched a review aiming at unconditional offers and widening participation.

22nd July 2019- UUK announced its separate admissions review, this same review has been concluded and its report “Fair Admissions Review” was published on 13th November 2020. The review recommended the switch to a PQA system by 2023- there will be no further consultations on this procedure. UCAS is also about to suggest its proposals to reform the admission system.

According to the UCL’S Institute of Education Research, almost a quarter of high-ability applicants from lower-income households had their grades under-predicted between 2013-2015.

“We should celebrate the fact that we are seeing record numbers of disadvantaged students going to university, but the current admissions system is letting down the brightest pupils from the most disadvantaged backgrounds.

“By using predicted grades it is limiting the aspirations of students before they know what they can achieve.

“We need to explore how to change a system that breeds low aspiration and unfairness. That is why we are exploring how best to transform the admission process into one which can propel young people into the most promising opportunities for them within higher education.

“It has been a challenging time for the education sector, but Covid-19 will not stop this Government from levelling the playing field and empowering students to have the very best opportunities to succeed.

The reforms announced to a system where offers are made after students have acquired their grades could also put an end to the soaring use of unconditional offers; this can encourage students to achieve a lot more.

Education Sector groups comprising UCAS along with the social mobility charities such as the Sutton Trust have highlighted the benefits of switching to a post-qualification admissions system. According to the recent poll conducted by the Sutton Trust two-thirds of young people think that the new practise would be fairer than the current system.

“We support the government taking a serious look at reforming the admissions timetable, which we have been doing over the last few months with universities, colleges, students, and schools.

“There are different approaches to reform, so it’s right for any consultation to be open-minded and have the aim of levelling up fairness for students. Importantly, the consultation will provide an opportunity to address any unintended consequences of such major change, as well as practicalities for higher education providers.

“The University of Cambridge welcomes the government’s decision to consult on reforming the way students apply to university, particularly through the adoption of a post-qualification admissions system. The University will work with the government towards the shared goal of establishing a system that will better enable our brightest young people, regardless of their background, to access university places that match their ability.

“CST supports the Secretary of State’s decision to consult on post-qualification admissions. While there is much to consider in terms of the detail of these proposals, it is important that we pause to consider the impact of our current arrangements, particularly on students from the most disadvantaged communities.

A BBC News article ‘Ditch Predicted Grades” from University admissions, published on 19 June 2018 said that the United Kingdom was unusual among developed nations in using predicted grades. The UK Universities should abet the use of predicted grades when people are applying for lecturers or headteachers.

A report from University and College Union says no other developed nation uses such a forecasting system of results for University admission procedures. The lecturers say most predicted grades turn out to be false. Furthermore, Headteachers favour the calls for a change, and backed it by saying the current approach is “no longer fit for purpose”.

“Applying to university with actual A-level grades is a reform that would enhance social mobility as it would sweep away the barriers, from poor advice to low expectations, that for too long have stymied the prospects of poorer students.

The Government will seek out to set out proposals for consultations in the coming months, inviting suggestions and views from schools, colleges, and universities to make this work in the best interests of students. This collaborative procedure explores how post-qualification admissions could work in the United Kingdom and whether this will improve social mobility along with the experience of students.

Sofia is dedicatedly assisting students with their IT assignments for the past 13 years. With an understanding of information technology, she has worked with several IT organizations in Australia and USA to explore strategic and managerial issues raised from information technology management. After spending her tenure with large corporations, she switched to My Assignment Services. Sofia realized that what she has observed in the past years can help students excel in these disciplines. Hence, now she leads a team who assists students with their homework and achieve the best learning outcomes.